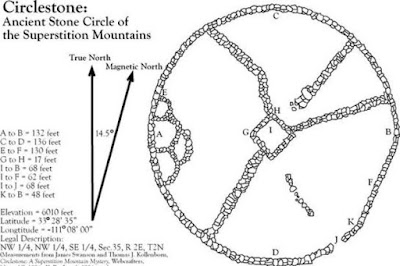 On Tuesday morning we were scheduled to take a day hike to the Circlestone ruins (https://thephoenixenigma.com/circlestone/) which is a unique archeological feature located at an elevation of 6010 feet which is close to the highest point in the entire Superstition Mountains.

The rain was indeed intermittent so after exploring some of the valley around the Reavis homestead we decided a to head out to see the ruin for ourselves. The hike was very intense with a significant elevation gain and a trail that was pretty much creek beds and dry waterfalls (at least dry when we started). By lunchtime we had reached the base of the trail that would take us the last 0.8 miles to the ruins. The rain had held off and once we approached the top of the trail I made a mental note that we needed to be sure to NOT LOSE THE TRAIL on the way down. There were some small cairns to indicate the path but not much else. Once we made it to the edge of the ruin I made my first mistake....

"Man, that was a crazy climb," I opined to Leah. "I can't believe that they would carry their dead all the way up her to bury them." [I had been told that this was a potential burial site.] "If I were a Native American I would never do that...I would just plant them where they dropped." This was an insensitive and unkind comment. Seconds after the words left my lips we were in a blizzard. Seriously. I kid you not. Had my unkind words unleashed the assault? Visibility plummeted. We suddenly noted how cold and windy it was and we took a final brief look around and made for the exit..

But where was the trail? We started down with wet snow making the trail difficult to pin-point. Suddenly I realized the I had LOST THE TRAIL. This was not good. My heart began to pound and I was having a hard time concentrating. I looked at the GPS unit and could see where I was and where I needed to go but not how to get there. So being an Eagle Scout, a respected medical professional, a father and a faithful believer I did what came naturally: I panicked. Yes, I totally freaked because you see...I HAD LOST THE TRAIL. In my mind that fact was now becoming equated with YOU ARE GOING TO DIE OF EXPOSURE. We had no shelter. We had no extra clothes nor a space blanket. We had no lighter. We had no matches. If I hit the SOS button on the GPS this was going to be a search and recovery request not a search and rescue. In my panic I connected the points on my GPS and began bushwhacking...also not a good idea.

Finally Leah brought me to my senses and got me to stop freaking out. We talked about our situation. I asked her "If you were in charge, then where would you look for the trail?" She said "Back that way and over in that direction." So that's where we went and literally in 2 minutes we ran across the trail and headed down away from Circlestone. I was and am still humiliated by my freak out. In medicine the old adage is "The first pulse that you take when running a Code is your own." I had failed this first challenge but the day was still young and soon I would have a chance to redeem myself and get us through an even greater challenge. Although the panic did not return we would soon be facing an onslaught that would make the Circlestone blizzard look mild by comparison....

DrG
John David Gordon is the former Co-Director of Dominion Fertility. He is board-certified in obstetrics and gynecology and specialty board-certified in reproductive endocrinology and infertility. Dr. Gordon is a summa-cum-laude graduate of Princeton University and attended medical school at Duke University. He completed his residency in obstetrics and gynecology at Stanford University Medical Center and a fellowship in reproductive endocrinology and infertility at the University of California, San Francisco.